Since starting work in China, I have made several attempts to visit the Banqiao Reservoir in Henan Province. My well-intentioned Chinese colleagues always had better suggestions for me: come see the pandas in Chengdu, stone warriors in Xian, Yu Garden in Shanghai. All fascinating, but I was determined to visit the site of the biggest man-made structural failure of the 20th Century.

In September 2018, I finally persuaded two Chinese friends to come with me. As with so many things in China, it would have been almost impossible to make the trip independently. Our comfortable high-speed train thundered across the flat plain at 300 km/hour to Zhumadian. 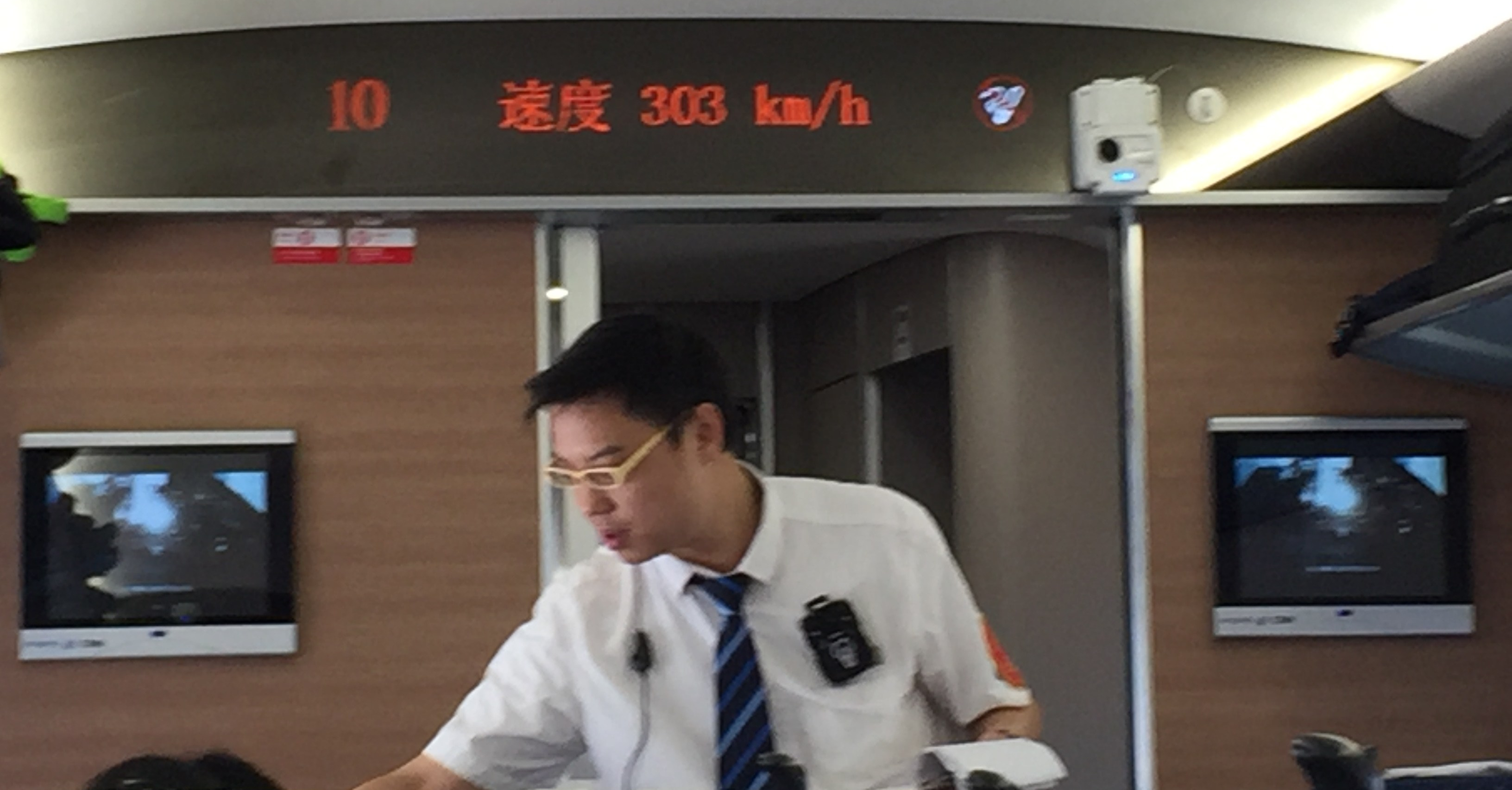 The hire car we picked up at the station was a little shabby inside, worn seats and carpets. It took some ingenuity to open the petrol cap, the windscreen washers didn’t work and the air conditioning was so feeble that open windows would have been preferable. Except for the dust. Given the roads we travelled on, rutted and potholed, the rent a wreck was the perfect choice.

Where the roads were tarmacked, they had been commandeered to dry corn. Great yellow carpets made up of millions of individual kernels, lined the roads, reducing the surface to one narrow lane, protected from the traffic by judicious placing of green beer bottles.

It’s an interesting deterrent. Come too near my precious crop and you’ll get a flat tyre.  There was even a dismembered mannequin, a grey/white torso guarding one corner. Who knows what happened to the rest?

We observed the corn harvest at all stages: the farm labourers gathering the cobs; elderly women squatting by the roadside, rubbing two cobs together to release the kernels, younger women with rakes setting them out to dry.

Passing through the sleepy village of Banqiao, we turned towards the reservoir only to find that access to the damn was barricaded off. 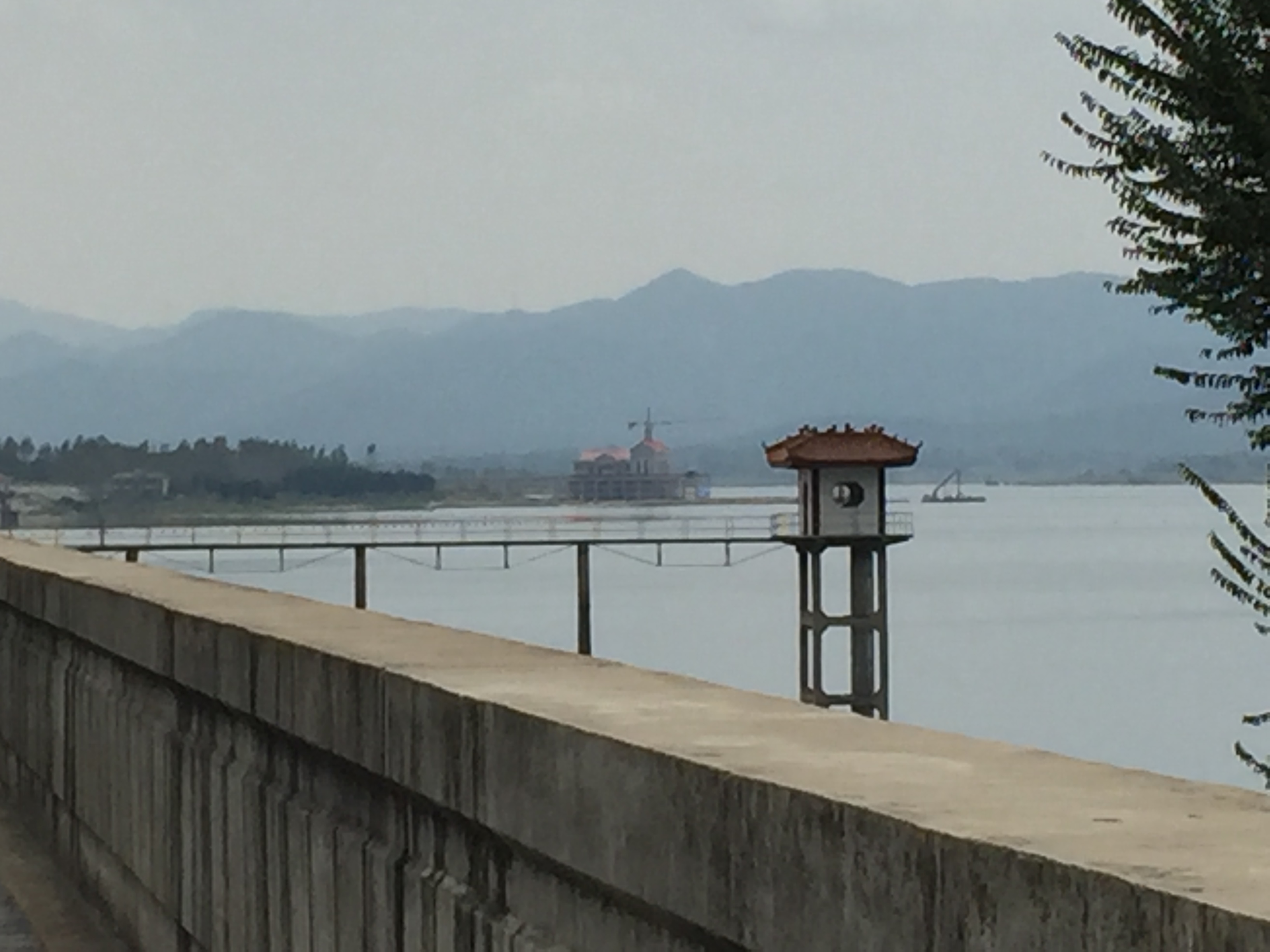 Sensing my bitter disappointment after such a long and uncomfortable journey, my companions announced that it was time for lunch.

In the local Muslim restaurant, there is at least one in most towns, my request for a quick bowl of soup quickly turned into a delicious multi course banquet. Bright yellow pineapple flavoured fizz (that had seen more tartrazine than fruit), fried fish, stir fried aubergine in a rich sauce of mushroom, onion and tomato and beef salad – the tenderest slices on a bed of coriander and garlic. And finally, the soup – a cauldron of lamb with home-made flat noodles, each single portion sized to feed an army. 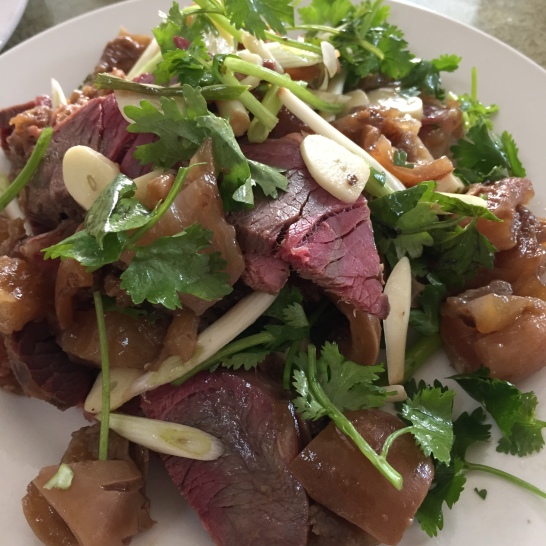 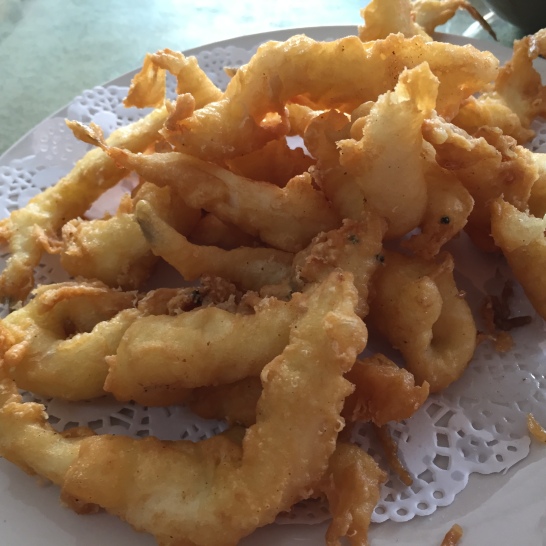 Replete, and armed with local instructions on how to proceed, we took up the offer of a boat trip. Expecting a rickety fishing boat, I was amused to be handed a brand-new orange life jacket and taken out in a 6-seater fibreglass motor boat with a powerful outboard engine. 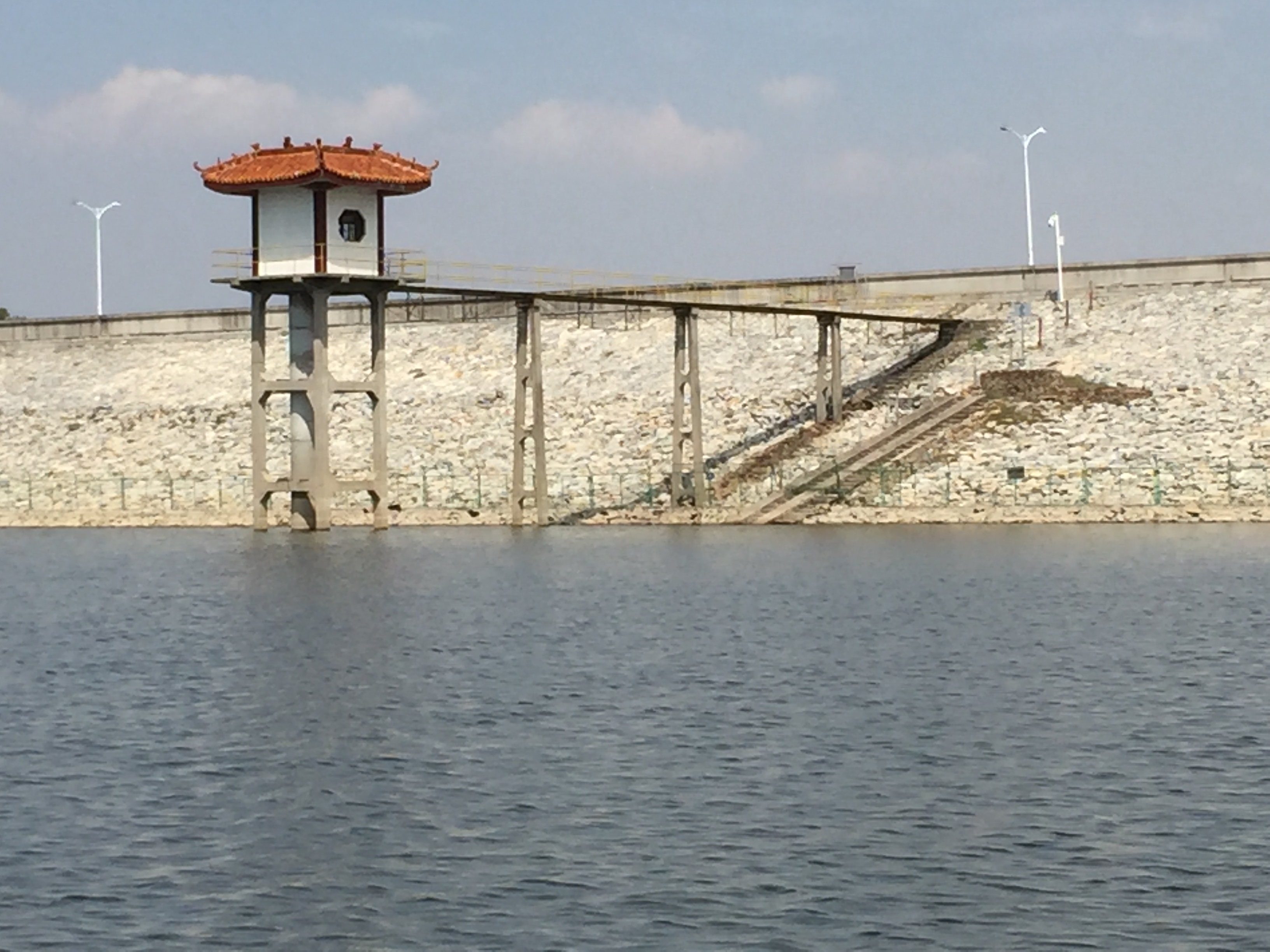 The boatman zoomed across the water to the dam itself, showing us how much lower the old dam had been, the position of the inadequate sluice gates, the point where it had breached, and the hydroelectric plant in the distance.

We dodged fishing nets and sped across clear, still water – backed by conical mountains rising in the distance, windmills turning on the top of forested foothills – towards a sandy beach on the far side. A white heron took one look at us and flew away.

I left the boat and walked away from the water, climbing through a copse of pines to a little hillock. So quiet: the rustling of leaves, the lap of water against the shore caused by the wake of the boat, gradually dying away, even the birds were asleep on the hot early September day. Not another soul in sight.  Just the scent of pine and lemon thyme. It’s a very peculiar sensation to be alone in China. A rare experience in a country of a billion people concentrated in the bustling modern cities that line the eastern seaboard and the fertile plains that make up the corn basket of China.

I gazed across the vast expanse of water. So eerily calm on a late summer’s day. A sleeping giant. How could something so beautiful, so essential to life also prove so deadly? 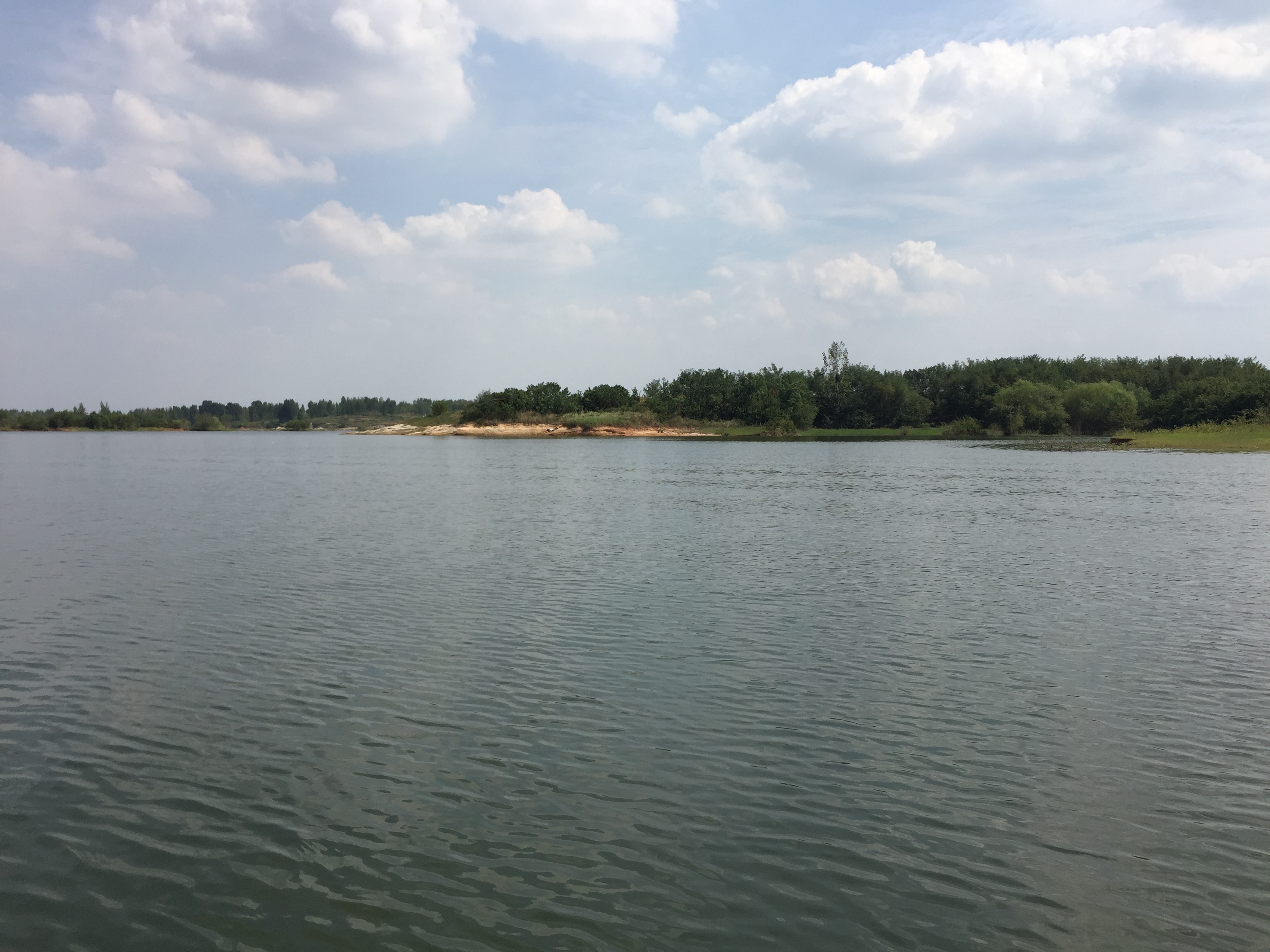 On 8th of August 1975, about one hour after midnight, the Banqiao dam collapsed.

An estimated 230,000 people drowned that night. Communications were lost, road and rail links destroyed, the relief effort was late and inadequate, and many more people died of disease and starvation. Some estimates put the final death toll at 1 million people. By any reckoning, it remains the deadliest structural failure of all time.

The clay dam, 24.5m high, was started in 1951 and completed in 1952. Chen Xing, a hydrologist involved in the design, recommended 12 sluice gates. He was removed from the project and only 5 were installed. Cracks and leaks appeared due to shoddy construction and Soviet engineers were brought in to strengthen the damn. Hailed as the iron dam, it was considered unbreakable.

In 1961 Chen Xing was brought back and repeated his warnings about the design. His outspoken criticism was too much for the authorities and he was again removed from the project.

In 1975 typhoon Nina struck, and a year’s worth of rain fell in one day. The damn breached and 700 million cubic metres of water were released in six hours. A total of 30 dams failed downstream, one after another, like dominoes.

Our self-appointed guide was 4 when the disaster struck. His family lived in the mountains above the reservoir and watched the tragedy unfold in the plain below. He told us that Banqiao village itself was unaffected, and some of the closest villages also escaped.

The initial breach was 300m wide. The danger came as it spread. By the time the water reached Suiping, ten miles from the dam, it had turned into a tidal wave of water 10km wide, 5-9m high and travelling at up to 50km per hour racing across the flat land, demolishing everything in its wake. It tore up roads and bridges.  Whole villages were swept away taking families as they slept

Those who survived the deluge might have wished they hadn’t. Telecommunication with the outside world was destroyed along with road or rail access in or out of the area. Anything edible had been spoiled. And the calm water that now surrounded the survivors proved every bit as deadly as the wave that brought it. With even the most conservative estimate putting the immediate death toll at 26,000, the flood water was now full of bloated, rotting corpses. The relief effort was too little and too late. It is estimated that as many as 11 million people were displaced, many dying of famine and disease.

In the affected area, few children under the age of ten survived. When the primary school in one of the villages reopened, there were only 3 children left from a class of 300.

On the return journey, the boatman showed off his piloting skills, revving his boat and rocking us from side to side as we sped towards the mooring.

Banqiao village is a simple town, a strip of shops and businesses along a rutted road until you come to the grand gates of the monument. Following the instruction from our hosts at the restaurant, we found that although closed to cars, there was a side entrance, and we walked down an avenue of willow trees on a smooth, empty road. The monument at the end is vast and simple: a granite block with gold lettering beside a curved white marble sculpture. 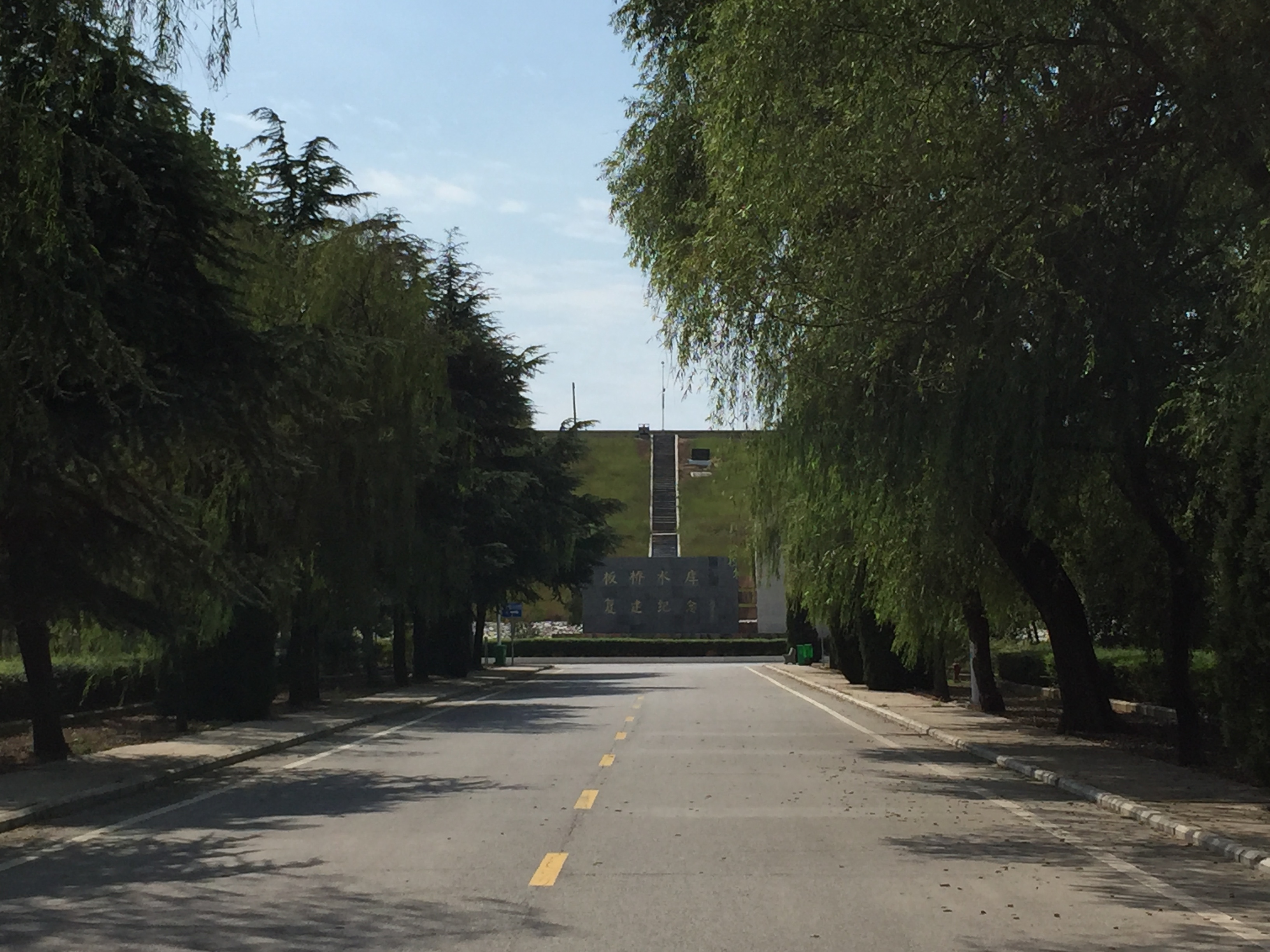 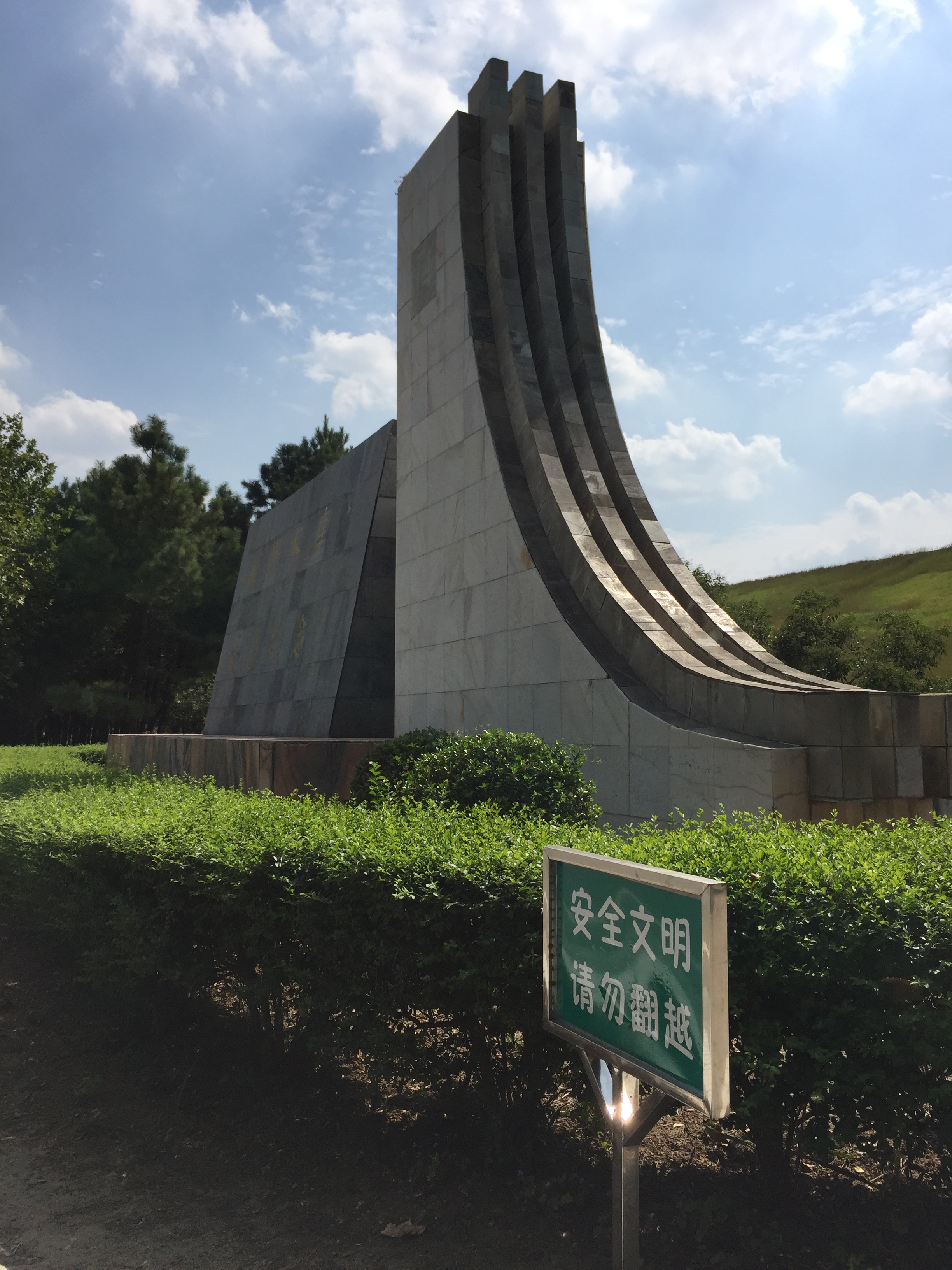 On the front, facing the road, the way any dignitaries would pass in their cars to the dam offices, is a simple message

Walk round the back and there is a brief, less illustrious history.

The Banqiao Reservoir Dam, originally built in 1952, was one of the earliest large-scale reservoirs built after the establishment of the People’s Republic of China. It was extended, constructed, and consolidated in 1956 and was destroyed by a disastrous flood on August 8, 1975. The flood volume in the three days was 697 million cubic meters, and the speed of peak flow was 13,000 cubic meters per second, which were both more than double the original design value. The instantaneous flow speed was as high as 78,100 cubic meters per second when the dam was destroyed. It was during a period called ‘ten years of turmoil’ when ineffective rescue was provided, so lives and properties of tens of thousands of people were taken away, which was a tragic havoc. It was rebuilt in January 1987 and was completed in five years. We are held responsibilities to eliminate flooding damage and facilitate water conservancy projects in order to protect the general public and their properties. The note is here to help us remember this lesson for life.

From down below you can appreciate the height of the dam, the banks covered in grass, a locked gate and fence preventing access to the steps leading up to the top.

As we left Banqiao, what struck me is just how FLAT this area is. You might imagine that the discharging water would spread and dissipate. The Banqiao dam is invisible until you are right next to it, the danger is concealed. 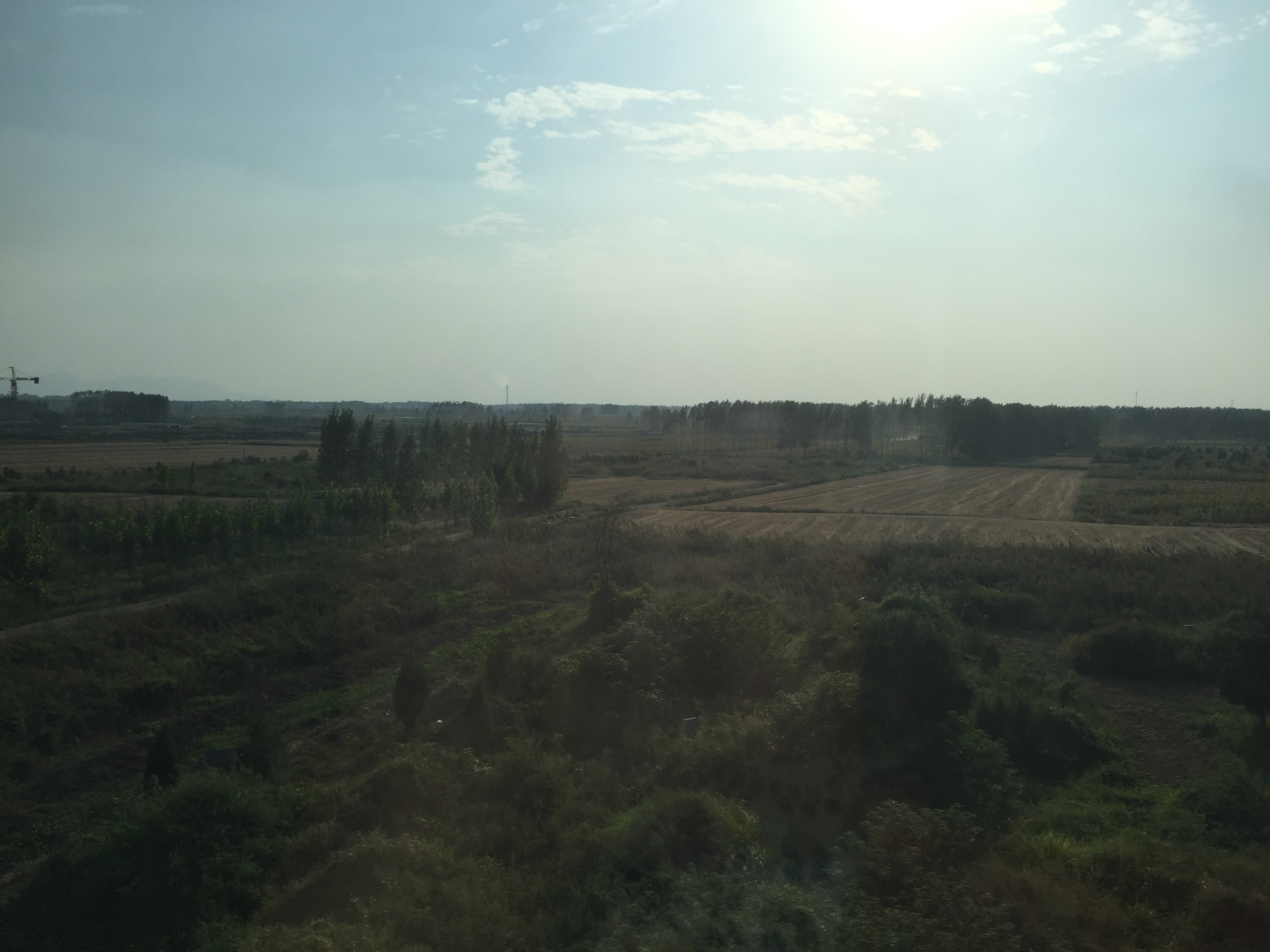 But the consequences of a deluge were well understood; water was even used as a weapon of war.

In 1937 Chiang Kai-shek ordered the breech of the Huayuankou dam at on the Yellow River, near Zhengzhou, in an attempt to halt the advancing Japanese army. A wave of water flooded into Henan, Anhui, and Jiangsu, shifting the mouth of the Yellow River hundreds of kilometres to the south. An official Kuomintang post-war commission estimated that 800,000 Chinese citizens drowned. The Japanese army simply changed route.

Even excluding the wartime disaster, hydroelectric power remains the most dangerous as measured by deaths per kilowatt hour produced.

And based on the number of deaths by drowning, water remains the most dangerous chemical known to man. T’aint what you do, it’s the way that you do it.

On the road back to Suiping, we travelled on terrible rural roads, blocked at one point by a broken-down water lorry. The only people we passed in the villages were elderly, busy shucking or raking corn. Maybe the children were at school and the adults at work, or maybe a giant wave had rolled down this plain 43 years ago and robbed them of the children who should be caring for them in their old age.

Water is deceptive. It is not the just the chemical element that matters, it is the stored energy that may be released. Large bodies of water penned up in reservoirs are dangerous.

The second book in the Jaq Silver Series – The Chemical Reaction – published by Point Blank  along with the first book (The Chemical Detective) are available from all good bookshops and online here.